I was looking for a few games I could play on my Macbook Air that wouldn’t use a lot of space or memory.

I was intrigued by the fact that there was a political sim game so I decided to give a try.

I downloaded it as well as the extra packs for it.   They have social engineering, clones & drones, & extremism.

This added content allows you to pass policies in relation to these like internet censorship,  police drones or drone strikes,  & also make church service compulsory for a few examples. (I’m showing one below). 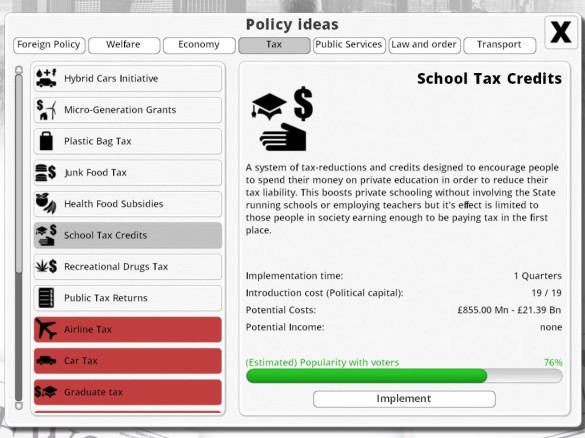 You can also add wire tapping & some other unpopular policies.

Each turn you’re assigned a certain amount of political capital to play to enact these policies.

So in the example above, to enact this particular popular policy it will cost you all of your available 19 capital.

Organ donation is an option under one of the options & on the first play through regardless of popularity I passed it because I felt it was the right thing to do.  The second play through I ignored it on purpose… I’d be curious to see if I could go back through those games & analyze & compare & contrast some of those states to see the effect of ignoring or enacting that policy had on other things….

You can also fire cabinet members with your capital as well, or you can strengthen past policies (greater degree of enforcement). 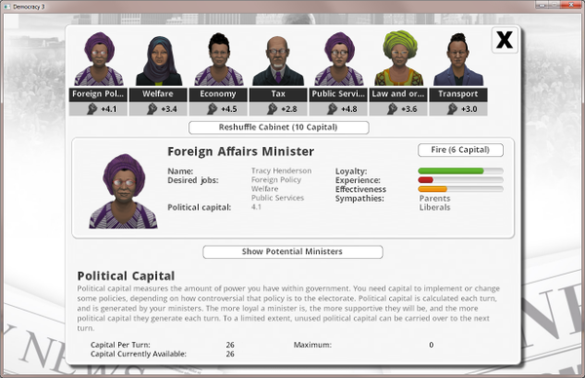 The more unhappy your cabinet becomes the more the loyalty goes down, & their capital, but replacing them might cost you one or two capital if they are on the verge of resigning so you can fire them with 1 and maybe get yourself 3 or more in place.

The first play through I played as Canada, I didn’t really make much of any adjustments at first,  & I just passed & enacted policies I would probably enact.  My first round lasted about 80 minutes. I’d say about 60 minutes into it, I started getting security briefings of an extremist group that started threatening me all because I made prayer optional in schools versus it being at the default parental request very early on.  This allowed opposition to rise up against me little by little.  I refused to enact any spying policies & had weak intelligence on purpose just to see the result.

I was extremely popular but my last three turns I kept getting assassination attempts. The third time was the charm & even though I was popular with 81 percent of the vote, I was taken out by this religious extremist faction just a turn or two before the election.

My tax policies were equal. I received achievements for eliminating poverty & pollution & creating an egalitarian society. (Below is an example of an achievement)

I also kept crime extremely low.  I had some hits from time to time on the budget & global economy but kept things well balanced.

But ultimately, I was taken out….

My second play through tonight, I played at the United States.

I rigged it basically to two parties at completely opposite ends of the spectrum with high voter apathy in elections. This is Germany but you can see a screenshot of how you can set things up or yourself. 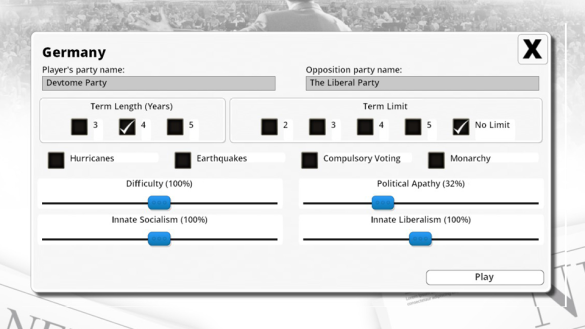 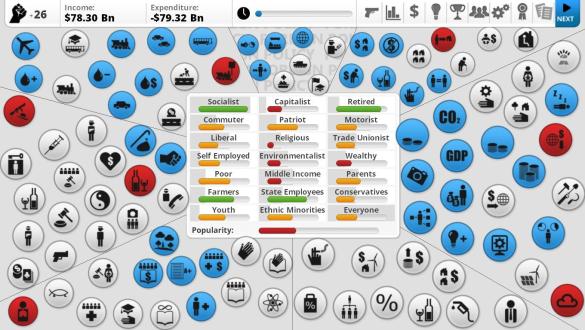 The above screen may seem daunting but this is how you can gauge your popularity & the effects enacting your policies have on people.  Getting your intelligence reports comes from the gun icon on the right corner menu.  The next essentially re-rolls you a turn.

If I felt my ministers weren’t giving me enough political capital to horde (There were times I passed weak policies to save on it) I fired & replaced them so I could get more capital.  I played more power hungry.

I had some major crises, but yet I made it through my first term & was re-elected.

You’ll get quarterly reports that let you know about events.  Both positive & negative ones like what’s shown above.  But the security briefing also gives you a one-line intelligence read on any factions or extremists that could become a problem.

Shortly after my re-election groups started to openly oppose me & like my prior game one threat became very high. They also found another group later joining in to help them.  I just kept increasing the police state & invasiveness of the surveillance in response but the tag-team was still too much.

I survived more assassination attempts (I think 4 this time) but one finally did take me out.

This time I played about 2 hours (double the time of yesterday).

Once you’re assassinated, it automatically ends the game.

There are even opportunity questions that come up that you have to weigh in on to ban or allow, like GMO foods, or whether to enter a nuclear treaty or not.

(The example below is in relation to oil drilling. You can see how they set it up so you can decide for yourself how to allow or prevent it from happening.)

You also get to decide who to appoint occasionally as a UN ambassador & you can choose someone who is a true diplomat, or more of a party favorite. 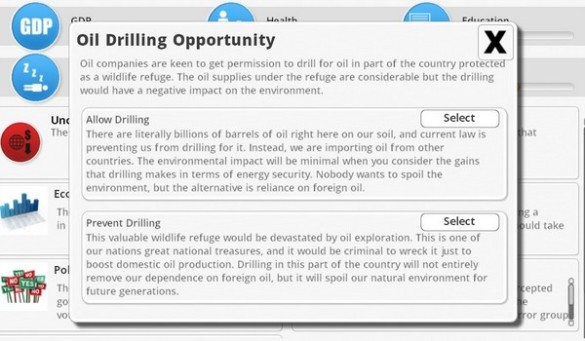 You can play as about 5-6 different countries & can get as in-depth or hands off as you want.

The more you horde your capital, the bigger the stakes in the policies you can enact.

But like life it’s a little too close to home at times….

This isn’t as in-depth as say a console video game (you can’t outwardly bribe your cabinet members or something like that & get their reactions) but for a PC game it is pretty impressive.

The screen looks intimidating at first to deal with because of the icon set up but it’s also set up that way so each turn you can see how one policy decision drives others.

But if you’re interested, there’s lots of data & info for you to get lost in if you want to dive down deep.

Yet it’s a pretty easy & casual game to play.

I guess there’s also an iphone version of it too that’s abbreviated.

I find this good therapy in this crazy election cycle when I try to mimic, manipulate, or simulate current events sometimes & take the opposite stand just to see what would happen.

I found I decompressed much over the few hours I’ve played it & was pleasantly surprised how much fun I had nerding out on this.

I know these types of games aren’t for everyone but since it was something I tried out that was different, yet fun & somewhat therapeutic (at least I thought so).